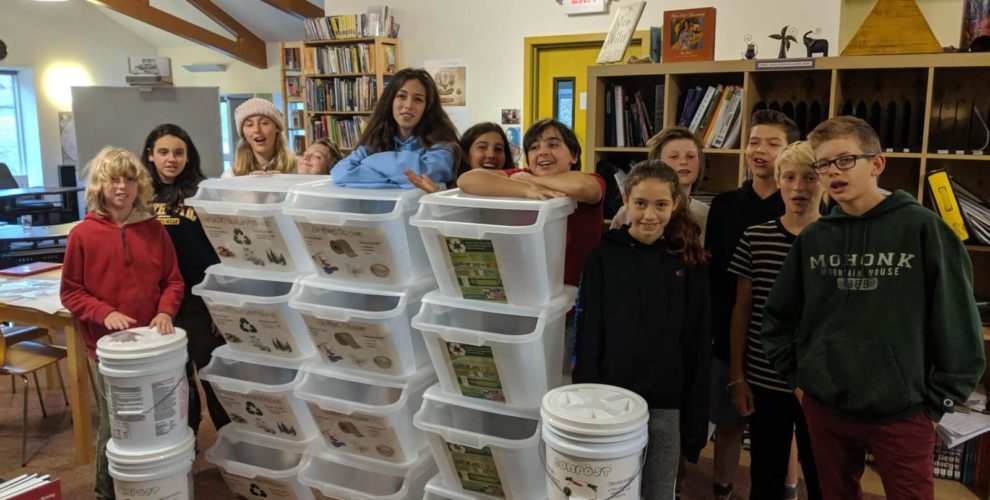 After my middle school class at Homestead School created awareness of climate issues, specifically waste, we implemented phase 2: making less waste at our school. It was the natural next step in continuing our work on climate change and creating a waste-free world. Over the span of a few weeks, we educated and inspired the other classes and made them more aware of waste reduction.

We wanted to see how much waste we as a school were making and wanted to reduce it so we weighed a week’s worth of trash and recycling and calculated how much we would make in one year! We calculated that, at this rate, we’d make 3852 lbs of trash, 1224 lbs of paper recycling, and 108 lbs of plastic, metal, and glass recycling in one school year. Altogether it weighed up to be 5,184 lbs of waste per year! We wanted to change this so we brought all the trash and recycling to the flagpole and told the school how much waste we make and what we are going to do to fix it!

We needed to get the entire school community on board with making less waste, so we scheduled an all-school meeting at the flagpole, during which we could show the school the amount of waste we make in a week, and have people pledge to make a change by reducing the amount of waste they make at school.. Before we had everyone gather up, we brainstormed and made posters of our pledge for each class. “I promise to reduce my waste, to recycle when I can, to reuse whenever possible, and to compost my food. By doing this I make the world a better place.”

A Scavenger Hunt for the Students

We now needed a plan to reduce the amount of garbage that we make, so we came up with a plan that would help each class recycle or reuse a lot more! We went to every classroom and gave them a lesson, four bins: recycling, soiled paper, Trex recycling, and compost.  We also made signs to put on each type of waste bin, including their garbage and paper recycling they already had in their rooms.

We had the students of each class do a scavenger hunt to learn about the different categories of waste they would be sorting. We created a bag of typical lunch waste that we dumped on to a tarp that we spread at their circle area. We had three groups reduce, reuse, and recycle! Reducers would be looking for items that had to go to the landfills like juice boxes, plastic straws, chip bags, and wrappers. We split the kids up into these groups and they found things on their list! Once they finished we had them put the items from the scavenger hunt in the appropriate bins we gave them, explaining about each item and why it should be placed in the bin they were placing it in. Explaining about Trex recycling was the trickiest but also the most funTrex recycling takes soft plastic like plastic bags and recycles it into outdoor furniture, decking, and even playground equipment. Usually, we just throw out our plastic bags after grocery shopping and they end up in landfills or oceans, but thanks to Trex recycling they can be reused in a better way!

Since we’ve given the bins to the classrooms, we have had teachers telling us how aware the kids are about throwing trash away and trying to recycle it. They have been asking which bin their waste belongs in and have been excited about making less waste for landfills. But here is the most amazing news:  We re-weighed our school’s waste for 3 weeks to be sure our data was consistent, and we found out that we have made a HUGE difference. We have increased compost by 30 pounds a week and reduced garbage by 40lbs, which is about a 38% decrease in waste to landfills! All the compost will become soil rather than methane in a landfill, and overall, Homestead School is now sending about 2,500 pounds of waste to the garden or to Trex rather than a landfill!

I personally really love that at the Homestead we are able to do things like the rally, posters, being able to teach kids important life lessons, and then later seeing it happen! We are going to continue our project and start phase 3, getting the parents involved!

Now that we had the entire school connected on our project we realized that the school was still using paper to send out messages about school being closed, that the buses will not be coming, etc. We thought about it and found out that we were giving away 200 papers each time we had communication, so we talked to the School Admin and suggested that we use the internet to send out messages rather than the paper mail. They agreed and now instead of sending home 200 papers for each communication, we are sending less than 10!

October 24 &25 of 2019,  we co-ordinated a clothing swap to help raise money and offer people an inexpensive way to get clothes for their kids without feeding into the system of overproduction.

A few days beforehand, we sent out a letter to the families of the Homestead, asking if they would bring in clothes that they no longer used or needed, but are in good condition. A bunch of families brought in old coats and baby clothes so the Middle school class sorted all of the clothing into different piles.  Baby clothes, kids clothes, adults, coats and snow pants, shoes, and toys. Upfront we were selling dried mango and nutrition bars. We wanted do give out a healthier option for food so instead of brownies, we made nutrition bars. They were gluten-free, fat-free, and sugar-free. We also gave out dried mango for a little natural sugar boost. We also made signs to help promote 2nd hand shopping rather than just getting rid of it!  The families came in with money and they went second-hand shopping! This went on for two days and in total, we raised over $1000 that went to make the school becoming an International Peace site and to upcoming Green Design projects.

It’s pretty incredible that 14 middle schoolers can make an entire school go so much closer waste-free in less than 2 months and educate, not just the students but the parents too, on why it’s so important to reuse and recycle! Imagine what we can do as the year continues!