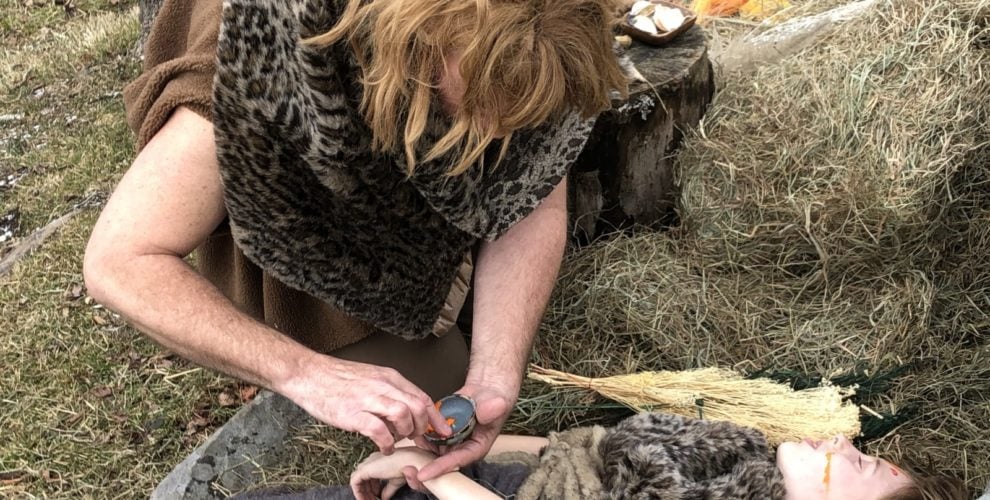 While Montessori stressed the importance of using real objects and the use of authentic names and terms with young children in the first plane of development (through age 6) she sometimes referred to the elementary years (6-12) as the “Age of Imagination.” Elementary Montessori teachers often introduce our cultural subjects with impressionistic, storytelling lessons. One of the techniques our Upper Elementary teachers use is the “first-person, role-playing visitor” to help elicit an immersive response from students to a historic character, concept, or situation. As part of our recent study of early humans, several “visitors” came to our class. What follows is one student’s impression as recorded in her class journal (Chava Eisenberg).

We were all sitting down for Cosmic. Ms. Carla was going to teach us a lesson, but then a half-ape, half-human came in! But the strangest part was that he looked like Joel! He called himself Harry. Harry didn’t speak full sentences, and he taught us about what his life was like. Where he lived was very hot, and he thought it was cold here. He explained the animals, and it sounded like he was from Africa. I learned that he ate frogs, bunnies, reeds, basically anything. It all sounded like he lived two million years ago. He told us how in order to survive, he needed to live near water. The water that he told us about was clean. He also said that he lives with his mate Harrieta and their son. They lived in a shelter made out of branches. They didn’t have fire. And he was confused at the modern-day things here. Harry left, and Joel came back. It seemed like they switched places and Bodies!

Well, that’s all that happened. It was fun.

Joel was going to build a fire, like how Homo erectus did it. We went outside to the place where we were going to have the fire, but there was already a fire made by a Homo erectus! She tried to scare us away with it. After a bit of talking, she invited us to sit around the fire. Just like what happened to Joel, we found out that Kola and Carla switched places. So we asked her questions.  She said that she eats buffalo and she can draw! She said that her name is Kola. She has a mate, named Kim, and a son named Ki. She said when someone had a broken bone, they would try to heal it. She wore animal fur when it got cold. She told us how she lived in a rock shelter in a valley. She told us that they made mattresses out of moss and animal skin. She also told us that they made a really big fire to scare the animals. They used the leftover charcoal to draw on her skin and on the walls. Then Ms. Carla came back! She told us about her adventures.

It was also fun.

We just had recess and went down the hill trying to go to our classroom. But there was a sign! It said there was broken glass, so we had to go around to the backyard. We went to the back doors, Ms. Cherish came out, saying there was something on the side of the building. Then, there was a Neanderthal man! He was holding a dead child. He went to a place where hay was laid out. There was a stump with a bowl of facepaint, a bowl of shells, two bowls of nuts, flowers, herbs, and cinnamon in a little leather pouch. There was also a skull of a sheep, a small antler, and some small toys that were probably carved out of rock. He took the herbs and shook them in four different directions. He kept on doing that until he was done with all the objects. He sprinkled some sort of cinnamon smelling thing over the dead body and everything else he also put in the grave. He covered the body with hay. He seemed very sad, and then just left. Just left. No name, no nothing. After that, Jim came back! They definitely switched places. Oh, I forgot! There was also a bowl of facepaint which he put on the child and himself, in a zig-zag pattern. The facepaint was red and orange.

We were sitting down at Cosmic, Rose came in and said there was a time portal. We all went in it, and it led us to the inside of a cave. There was a Cro-Magnon! She was banging a drum. She put down the drum and picked up a shaky thingy. She shook it and put it down. She picked up several other things and did the same thing. Just like what happened with every other teacher, we found out that Ms. Cahn and the Cro-Magnon also switched places. She had a candle, shells, charcoal, and paint. She also had tattoos. She used the charcoal to make a drawing and the paint to add detail. She also chanted really weird words.

Then she left, and Ms. Cahn came back.

Now that was weird.