How the Homestead Middle School Reduced Waste by 2,500 Pounds Annually 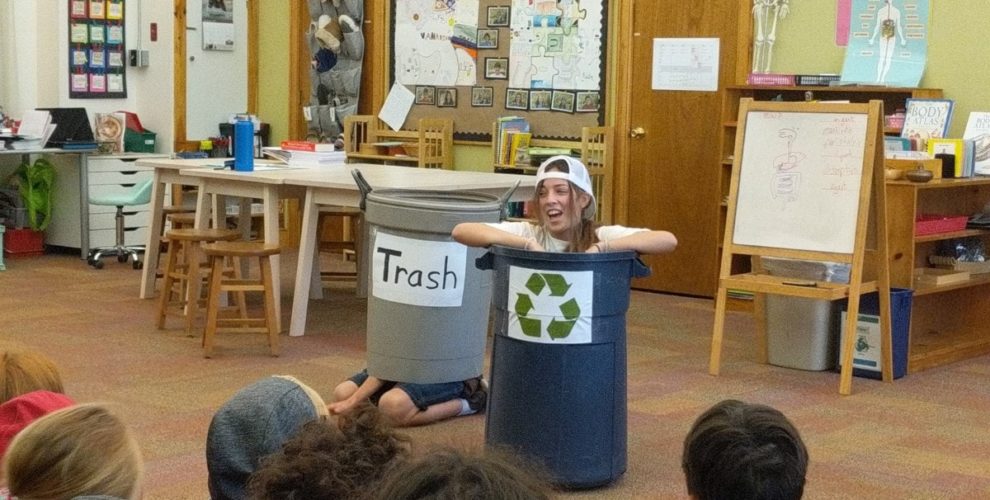 The Global Week of Climate Action took place from September 23 to 29, and since we are so passionate about our Earth and our futures, the middle school class decided to participate! We developed three phases to our project: raising awareness, implementing waste reduction at school, and bringing the parents on board. Soon, one week of climate action turned into one month, and each week we had something special to offer to the school and the community.

In the first week, we wanted to raise more awareness about climate change. Most people at the school knew a bit about it but we wanted to educate them further. We decided as a class that we would make protest signs that would bring attention to the subject. We did research and found inspiration online that helped us make our signs. We met as a class to fine tune our messages and then we split into groups and began to sketch out our designs. We decided we would put them on the road in front of the school so the parents driving their kids to school, and the people passing by could see how much we care and want to work together to help take care of our planet! Once we finished creating the signs, we stapled them onto posts and stuck them into the ground. Some of the signs were funny like “Climate change is not a joke! Seriously scientists aren’t that funny!” While others asked people to step up, “If climate can change, why can’t we?” or “We can climate together!”

We wanted to educate in a way that the students and teachers could better understand the impact of waste and be inspired to reduce it. The middle school class brainstormed ideas about how we could help enlighten others as to how we were hurting the earth, and we decided to make a play. We talked about what we wanted to cover in the play and a couple of the students took the time to write the play. The next day the class practiced the script and made a couple of changes to it, and the same day we made our costumes and memorized our lines. We made and memorized an entire play in two days and headed out to perform for each of the school’s classrooms.

The play was about creating less waste. We had good characters like Metal Water Bottle and Recycling Can but we also had bad characters like Plastic Water Bottle and Plastic Bag. We showed how when people don’t recycle or compost, it affects the environment, from the air we breath to the animals in the oceans. We had a part in the play where a human threw food into the recycling and a reusable container into the trash. Since this is something that a lot of people still do, we had the bins talk about how frustrated they were at being misused. Once a helpful human came and moved the misplaced waste into the right bins, they felt much better!

Friday, September 20 was an international climate strike day. Our school is already very passionate about protecting the environment, so walking out didn’t make that much sense. Instead, we decided to act. In just six days, our class brainstormed ideas on how we could promote awareness on factors of climate change, especially relating to waste. We made a plan, created and posted signs, brainstormed a play, wrote the play, and performed it in just two days (we performed it six times, once in each classroom!)

It was a lot of work, but it was worth it! It felt amazing to be able to teach the little children about how we can make the Earth a better place, because if they know this at an early age then they can begin making a difference now. Even though climate week was wrapping up as we finished performing, we decided there was still more we wanted to do. During the next phase, we worked on creating less waste in each classroom at the Homestead, so there is still more to come!

Alumni Essay: Larry Gibson and the Battle for the Mountains of West Virginia