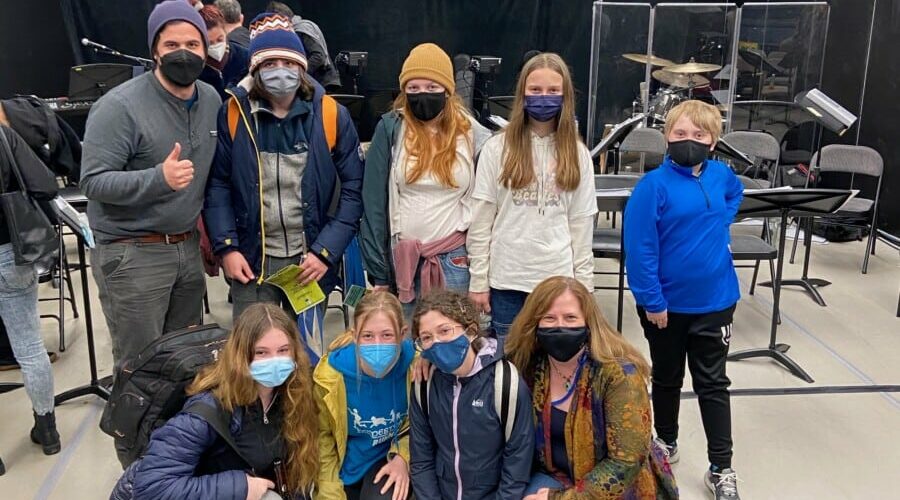 “Musical theater is a way to bring people together, to open others to a new voice and perspective that maybe they haven’t discovered yet,” says seventh-grader Audrey Shannon of Homestead Collaborative College High School (CCHS), a participant in this year’s musical theater elective. This March, Audrey and six other seventh-, eighth-, and ninth-grade musical theater enthusiasts were opened up to a new perspective through a dress rehearsal of the brand-new musical Fat Kid Rules the World in New York City. The musical is based on a young adult novel of the same name by award-winning author and CCHS Language Arts teacher Kelly Adams, who writes under the pen name K.L. Going. Both book and musical explore themes of self-image, standing up for others, and finding family through the eyes of an obese teen who becomes a punk-rock star.

This performance, directed by Mark Erdahi and produced by Rob Ahrens, was one of four workshop showings open to a small audience of producers and theater owners in the hopes of  putting the show on the path to Broadway. It was preceded by several other stage adaptations of Ms. Adams’ novel, as well as an independent film directed by actor Matthew Lilliard.

The all-star cast featured Sean Allan Krill, who has appeared in the original Broadway production of Mamma Mia! and won a Tony Award for his performance in Jagged Little Pill, as well as appearing in numerous roles on popular TV shows; Samantha Pauly, who has appeared in West End’s production of Evita and currently stars in Broadway’s SIX: The Musical; Anthony Norman, who appeared in The Prom on Broadway as well as the National Tour of Newsies;; and Christine Dwyer, who has toured with Rent and Wicked and is currently in the cast of Wicked on Broadway.

The show has been under development for eight years, but the actors and creative team were only given a week to put together the performance that would be viewed by investors. “I loved seeing the process of developing a Broadway show before hitting theaters,” said Violet Adams, a seventh grader who attended the performance. “I was really impressed with how quickly they can put together such a high quality production and all the actors were phenomenal.”

Other student participants shared equally positive feedback. “Their performance was ready for Broadway and honestly worth a ton of money, however, if it does make it to Broadway I want it to be really cheap so I can see it every day!” Audrey joked, adding that she didn’t have any criticisms. “It was almost like you were transported into the world. The emotion was so real.” Eighth-grader Rowan Bloomer agreed. “It was like no other experience I’ve ever had. It was very surreal,” she raved. Edmund Carlton, a teacher at CCHS who joined the students at the performance, noted the students’ energy and happiness after the performance: “I wish they could bottle how happy you all are feeling right now and show it to the investors: this is what this show made some middle schoolers feel like.”

Author Kelly Adams also noticed the students’ overwhelmingly positive energy. “The energy from the kids was amazing!” she stated. “I think I can safely say that the actors enjoyed having (them) there, and got energy from it.” Ms. Adams had nothing but positive feedback to share on the performance. “I’ve seen multiple productions and every single time I’m just astounded.” Comparing it to its predecessors, she stated: “I always wanted to see it again, but this time I needed to see it again.”

A great time was had by all involved, but the student participants regarded it not only as a fun field trip but an educational experience. They plan to apply what they’ve learned about musical theater from the Fat Kid Rules the World workshop to the school’s production of Into the Woods, Jr. which will be performed this June. Rowan said she learned a lot from the actors’ portrayals in particular, noting how they “reach(ed) into the audience”: “It doesn’t need to be fancy. You don’t need a set or anything, and even if something goes wrong, it doesn’t matter if the emotion is there,” she said on her takeaways from the performance.  “You need to become the character,” Violet agreed. Audrey also noticed how raw and real the actors’ performances were without the aid of sets, props, or costumes. “Since it was such short notice, they didn’t have many costumes,” she explained, “so I kind of learned that it’s not the costume that portrays your character, it’s the facial expression, the emotion, and how you present your character.”
With such a talented cast and creative team, Ms. Adams is hoping that the musical will be a success. When asked whether she had any news from the Fat Kid Rules the World team about it being picked up by investors, she stated, “Fingers are crossed. It’s a really slow process, so I don’t expect immediate news.” Everyone who was there for the rehearsal hopes for the best. However, whether or not the show makes it to Broadway, the lucky students who saw it performed will always be grateful for the incredible experience it was.